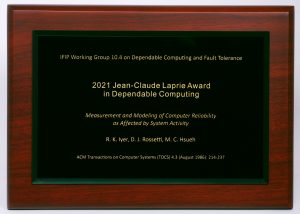 Professor Iyer and his co-authors; David Rossetti and Mei-Chen Hsueh; were recently awarded the Jean-Claude Laprie Award at DSN21 for the paper entitled “Measurement and Modeling of Computer Reliability as Affected by System Activity, ACM TOCS 1986″.

The award committee states “Measurement and modeling of computer reliability as affected by system activity” authored by R. K. Iyer, D. J. Rossetti, and M. C. Hsueh and published in ACM Transactions on Computer Systems in 1986 was one of the first papers to perform empirical studies of failures in real systems (IBM Mainframe and the Stanford Linear Accelerator Computing System). The paper showed that there exists a strong correlation between the nature of the workload and its intensity and the failure rate of the system. This was a seminal result in that it showed that one needs to understand the overall system’s composition and behavior, in order to make predictions of its overall reliability. It also established the primary role of empirical measurements of failures of real systems, rather than rely upon (simple) analytical or simulation models of failures, and hence established the scientific foundations of the field of empirical reliability measurement.

The paper has had a tremendous impact in shaping subsequent empirical studies, as well as those in analytical modelling of computer systems. The idea has been incorporated in classical dependability textbooks (e.g., Reliable Computer Systems: Design and Evaluation, Third Edition, By Daniel P. Siewiorek, Robert S. Swarz), dependability tools (e.g., SHARPE) and into many commercial systems for dependability measurement (e.g., by IBM). This paper has been considered as a landmark paper in the field of computer system reliability by the evaluation committee, which resulted in its unanimous selection for the award.”

For more about The Jean-Claude Laprie Award, please visit http://jclaprie-award.dependability.org/

You can view his acceptance video here:  https://mediaspace.illinois.edu/media/t/1_gh7vkiwr

Congratulations to Professor Iyer and his co-authors!